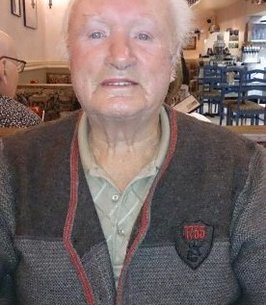 It is with great sadness that we announce the passing of our dad on Tuesday, May 10th at St. Joseph’s Hospital in Hamilton. Werner was in his 90th year. Beloved husband of the late Frances (2013) of 57 years. Loved father of James Darin (Debbie), Catherine Melissa (Ron). Adoring Opa of Kassia (Ryan), Andrew, and Matthew. Werner was born on September 20, 1932 in Schonanger, Germany. He was the only son to Friedrich and Katharina Boxleitner and big brother to his sister, Helga. He learned his trade as a baker at the age of 16 and earned his apprenticeship at 19. While working in Munich, he met the love of his life, Franziska and in 1956 they were married and moved to Canada. In 1960 they bought their first and only home in Toronto. In 1963 they returned to Germany to attend the International Convention in Munich and were baptized as Jehovah’s Witnesses. In 1965, their son Darin was born and in 1969 their daughter Melissa was born. Werner worked hard to provide for his family before retiring in 1996. 11 years at the Bryant Press in Toronto and then Chrysler Canada from 1968-1996. Over the years, he built a reputation for being conscientious and industrious. Werner enjoyed his retirement immensely. He loved the outdoors and spending time at home. Summers in the backyard chopping wood for his fireplace, gardening, feeding the birds and chipmunks. In his younger days, taking the family on trips, skiing and toboggining. He also spent many joyful hours in the field ministry alongside his wife and children. He was known for early morning street witnessing in Weston. He enjoyed volunteering his time and energy for many years at the pioneer schools serving lunches. He enjoyed the fellowship with his brothers and sisters. Werner was a good cook and liked to offer his advice on many dishes. He liked to watch cooking shows, TV comedies, German volksmusik dvds and the Toronto Maple Leafs as hockey was his favourite sport. He loved to travel and speak about his many trips. He was never afraid to visit different places even if he didn’t understand the language. However, everything changed for him with the sudden passing of his dear wife, Frances. In his later years, life started to become hard for him living alone and finally he ended up having to move to live in Hamilton with Melissa, Ron and Matthew. There he found a new home and quickly became very comfortable there. He enjoyed being together with his family and being able to attend the meetings on zoom and the association afterwards. He always said he was going to live to be 100. His hope to keep living never diminished as his unwaveringly faith in the new world kept him going. He will be greatly missed by his children, grandchildren, relatives and dear friends.

Memorial service will be held virtually at a later date.