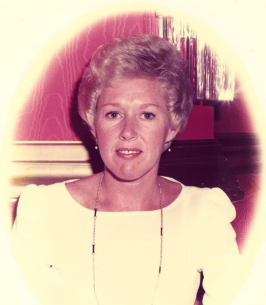 Vivien Ann Ritchie (July 10, 1943 – September 4, 2022) took her last breath the afternoon of September 4, 2022, when she passed away peacefully at Joseph Brant Hospital in Burlington, Ontario with her family by her side. She was the loving and caring wife of 27 years to her predeceased husband (Robert – Bob – Ritchie) who passed in 1989. She then met and spent 25 great years with her partner and companion (Cornelius – Cory – Palo) who passed in 2017.

Vivien left behind her only son, Andrew Ritchie of Burlington, Ontario and his wife Tanya, her older sister (Frances Rowe), and two grand children Zachary and Madelyn. She was predeceased by her parents Frank and Joan Rowe.

Vivien lived an exciting and full life. She was born in Bromley, Kent, England during WWII, and arrived in Canada in 1945 via ship with her family, initially settling in Brampton, and then Wasaga Beach, Ontario. After leaving home with her older sister (Frances) in her teens, she worked various jobs throughout her young life in Toronto, Ontario. She met the ‘love of her live’ (Robert) and together they had a son (Andrew). While together with Robert, she was a great wife and Mother, and they travelled to many countries as a family, living in South Africa for 5 years.

Upon their return to Canada in 1975, Vivien worked primarily as a cashier. This provided her the opportunity to meet and engage with her many customers, some of which remained close friends until her passing. After moving to Oakville, Ontario, she worked at Metro (formerly Dominion), where she took on many challenges and responsibilities during her 25+ year tenure.

After Robert’s passing, she had the great fortune of meeting Cory. Initially declining his many requests for coffee, she finally relented, and they spent 25 fantastic years together travelling and enjoying life to its fullest. She retired in 2000, and together they purchased homes in Florida, a cottage on Belwood Lake, and a large motor home (aka “the Bus”). They travelled extensively throughout Canada and the US via “the Bus”. They spent most winters in Florida and cruised the Caribbean Sea and Gulf of Mexico via ship on numerous occasions.

Family was paramount to both Vivien and Cory. They willingly hosted all holiday events – Christmas, Easter, and Thanksgiving, as well as many birthday parties for family and friends at their Mississauga home or Belwood cottage. Both enjoyed cooking and hosting, and there was always plenty of food, libations, and good fun.

Vivien was a dedicated Mother first. She treasured her son, and they remained extremely close throughout their great relationship. She especially loved her role as Nanny, showering Zachary and Madelyn with love, her time and wisdom, and stories. She had a vibrant personality and always made people around her laugh with her dry sense of humour, including the Palliative Care Unit (PCU) staff at Joseph Brant Hospital.

Vivien made friends everywhere she went and will be dearly missed by her family and many friends. She will be fondly remembered for her love of family, big personality, grace, honesty, story telling, wit, and sense of humour.

Two characteristics many will not likely know, is her resilience and determination which she showed throughout her courageous battle with cancer, which came on quickly and fiercely. She graciously accepted her fate, and never complained, spending each of her remaining days with family and friends and fully enjoying the outdoors along the lake in her wheelchair.

Our heartfelt thanks go out to the Palliative Care Unit (PCU) at Joseph Brant Hospital, where Vivien received comfort and support during her remaining days. The Doctors, Nurses, Social Workers, and Support Staff treated her like a Queen, maintaining her dignity, providing her with respect, kindness, and exemplary care during her 40-day stay. Kudos and thanks to the PCU.

Cremation has taken place, and a private “Celebration of Life” will be held in the near future to remember Vivien and celebrate her incredible, but short life. In lieu of flowers, please give generously to the Joseph Brant Hospital Foundation, and the Canadian Cancer Society.