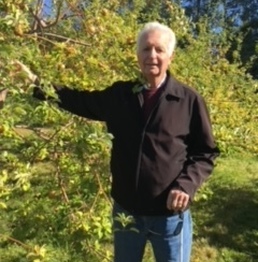 After a long struggle with multiple health issues we are sad to announce the passing of Raymond “Ray” Cordell Pearson, on August 3rd 2022 at the Juravinski Hospital in Hamilton at the age of 83. Raymond was a wonderful man that was loved dearly, is missed, and will always be cherished. Ray is survived by his loving and dedicated wife, travel partner, and best friend of 57 years, Catherine Pearson, Brother Doug (Anne) Pearson, Sister Patricia MacGillivray, Sister in Law Joyce (Brian) Mason, and Nieces and Nephews Gary, Tracy, Cory, Wendy, Cyndie, Buddy, Janice and Lynnie. He is predeceased by his Father Charles Pearson and his mother Mabel Pearson. The story of Ray begins in the small town of New Waterford, Nova Scotia. He was born February 12th, 1939 to Charles and Mabel Pearson. After attending high school, Ray joined the Canadian Army - First Canadian Guard when he turned 18 years old. Ray loved to spend time playing sports, especially basketball - which he played competitively while in the Army. During his time in the Army he briefly came back to Cape Breton and reconnected with Catherine, they were married on her birthday August 10th, 1965. After spending 12 years in the forces, Ray accepted a position with Stelco in Hamilton Ontario. He worked as Sergeant of Security for 25 years until he retired. After retiring, Ray spent a lot of time traveling and spending time with friends and family. You wouldn't find him too far away from a deck of cards or a crib board. Ray had the ability to light up a room, and could tell a joke like no other. He has touched the hearts of so many over the years and will forever be missed. Thank you to the staff at the Juravinski Cardiac Unit & ICU for their kindness and empathy throughout his stay. There will be no funeral service as per Ray’s wishes. There will be a celebration of life to be held in September for family and close friends.
Donations can be sent to the Canadian Diabetes Association.