To share your memory on the wall of Leonard Wilgosh, sign in using one of the following options:

After a short but hard fought battle we lost a good man. Len passed away peacefully at Juravinski Hospital in Hamilton, Ontario with Gail by his side.
Len will be missed an... Read More
Len Wilgosh
September 17, 1949 - September 20, 2020

After a short but hard fought battle we lost a good man. Len passed away peacefully at Juravinski Hospital in Hamilton, Ontario with Gail by his side.
Len will be missed and lovingly remembered by his wife Gail Ramsay, sister Norma Lotecki, brother-in-law Tom, nephew Ryan, nieces Heather(Erik, Oliver and Sarah) Shannon (Jacob and Julia).He will also be fondly remembered by Gail’s daughter Kim (Mark, Jackson and Jaime) and his dear friend Ed.
Len was raised in Beausejour, Manitoba and spent his early adulthood there. Later work took him to various places in Canada and Ontario became his home.
Len and Gail shared a love of travel and took many trips together. Their love of Italy took them there 4 times. Many winters were spent in warmer climates. There were 6 trips to Dominican Republic where they made many wonderful friends.
We are blessed to be amongst the few allowed past his tough guy facade and see his soft side.
Len was predeceased by his parents Frank and Julia Wilgosh.
Read Less

Receive notifications about information and event scheduling for Leonard

We encourage you to share your most beloved memories of Leonard here, so that the family and other loved ones can always see it. You can upload cherished photographs, or share your favorite stories, and can even comment on those shared by others.

Posted Sep 24, 2020 at 11:16am
Len will be deeply missed. He was such a great person. He may have looked like a big, mean bear, but he was teddy bear. When I first met him and Gail, he really didn't want hugs. But after a while, he came to accept and embrace them. We will miss our times with him and Gail at the beach in Punta Cana. Our lives were truly enriched when we met you guys so many years ago in the "ghetto". We hope to see you again one day soon Gail. Our deepest sympathy to you and the rest of the family. Rest in peace Len.
Love Brenda and Bob
Comment Share
Share via:
CS

Posted Sep 22, 2020 at 07:31pm
We are deeply saddened that Len was taken from us far too soon. We have many fond memories sharing time, meals and smiles with Len and Gail. The highway will be a different place without Len! Our deepest condolences to Gail and her family and to Norma and Tom and their family. Rest In Peace Len. We will miss you. Lisa and Gizelle
Comment Share
Share via: 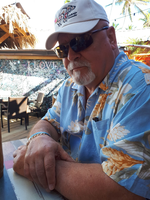