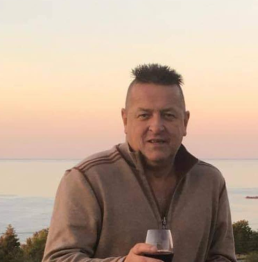 SPROSTON, Andrew Peter “Andy”
On Monday, January 3, 2022 at Joseph Brant Hospital, Burlington, Andy passed away peacefully surrounded by the love of his beautiful daughters. Beloved son of the late Geoffrey and Betty Sproston. Much loved father of Katie, Jade and Emily. Cherished Grandad of Jenson. Andy is survived by his sister Ruth, and predeceased by his brother David. Born in Liverpool, England on May 10, 1961, Andy spent many years in Cheshire, England working for British Gas before emigrating to Canada in 2007 and settling in Grimsby, Ontario where he became a farm owner and farmer himself following in his parents footsteps, specializing in rare breed animals. Andy became an active member of Heritage Livestock Canada and became a director on the board. His passion for farming was obvious. He ran his own farm shop called Farm Gate to your Plate which the people of Grimsby loved. Fond memories are had of Andy being a great DJ at Rock Garden, Upstairs at Ronnies, The 4 Ways, Cinderella Rockafelas and Vics club. Andy was also a big lover of football and his beloved football club Manchester United who he followed very closely especially throughout the 80s and 90s and enjoyed visiting the football ground watching the games with his daughters. Andy loved life and lived it to the fullest. Private cremation will be held. As per his wishes, he will return home to the U.K. where his children will scatter his ashes at St Oswalds Church Lower Peover, special place to him.